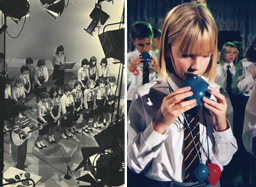 Media interest in our world-class ocarinas and ocarina performances has remained high during the last 38 years on TV, Radio and in print:

By 1986 the range of tuned ceramic ocarinas was complete. David accompanied his school ocarina group on stage at the Royal Festival Hall London and on ITV’s ‘About Anglia’ and the ‘Wide Awake Club’ – the group’s performances in the National Festival of Music for Youth were ‘Highly Commended’.

Between 1985 and 1993, David & Christa taught thousands of festival-goers to play the ocarina in mass open-air workshops during the summer months. Our Ocarina’s fame spread through International Festivals and numerous school workshops.

When the BBC asked for Ocarinas to accompany the singing on BBC Songs of Praise in 1995, two Edinburgh schools volunteered. We couldn’t have guessed that this would result in over 100 primary children playing ocarinas on prime time national television. Even more amazing is the scriptwriting of this little lad who echoes what most children say – “Ocarinas are Great!”

In 2005, fifteen members of a junior music group, Masquerade Ocarinas, wowed the audiences at the National Festival of Music for Youth with harmony-playing and part-singing that earned them the coveted ‘Outstanding Performance Award’. 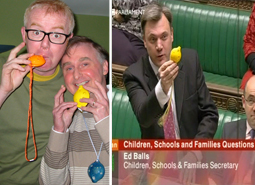 Then in June 2007, David was invited to discuss the merits of ocarina-teaching over recorder-teaching on Radio 4’s ‘Today’ programme. In February 2008, Chris Evans interviewed David about Ocarinas as part of a Radio 2 series on musical instruments ‘Endangered Species’. In the same month, we attended the UK Premiere of Penderecki’s 8th Choral Symphony which includes Ocarinas in the score. The BBC Symphony Orchestra and Chorus played sixty of our plastic and ceramic ocarinas at the Barbican for broadcast on BBC Radio 3.

Although our work has been showcased in such newspapers as The Financial Times, Daily Mail and Times Educational Supplement, our greatest achievement was reserved for a live performance in 2013. 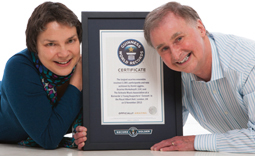 On 5th November 2013 at the Royal Albert Hall, London, the Guinness World Record for the Largest Ocarina Ensemble of 831 players, set in China, was smashed. 3,081 primary school children and their teachers established a new record with our world-class instruments in the UK’s largest concert hall! Their performance had to be ‘classical’ in nature and ‘professional’ in execution and at least 95% of those taking part had to play faultlessly throughout. We are grateful to all who made this winning performance possible – thank you – this record is an accolade to you!