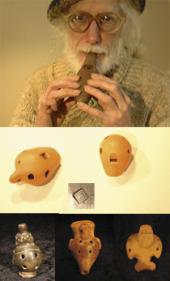 In 1983 David Liggins sought out the finest makers of English Ocarinas, John Langley and Terry Riley, and began buying ocarinas for his classes to play. Within months the tunes prepared for his classes became music books and by 1985, under David’s direction, the simple terracotta 4-hole Ocarina had been transformed into a Concert Set of SEVEN glazed English Ocarinas tuned for Ensemble-playing in Schools and Concert-Halls.

The first plastic English Ocarinas, the Poly-oc™ were factory formed from ABS plastic and hand-drilled by John Langley and his son from 1988 to 2004. Made in distinctive red and blue, they became obsolete when demand exceeded their manufacturing capability. In 2005 Ocarina Workshop® introduced Rainbow Ocarinas™. The Oc® is made in the UK and has new features to meet the specific needs of class teachers and primary school children. These plastic ocarinas are concert-tuned, robust and great fun to play, matching the singing pitch of ceramic Alto D ocarinas. An ongoing commitment to excellence in mass-producing plastic Ocarinas has been David and Christa’s focus, plus creating new and ground-breaking teaching resources to support class teachers. In 1996 they published an ocarina-making project – it takes about half an hour to make an Ocarina from a single pre-punched piece of card – the Card-oc® really does work and is in tune, from D to D’.

Our ongoing motivation is ‘music for all’ – and now we make one-handed plastic ocarinas, allowing children with the use of only one hand to play the ocarina alongside their classmates. This is facilitated by the one-handed ocarina-charts designed for the Duet Ocarinas™ – these unique and exquisite ceramic double-chambered instruments have two 4-hole ocarinas in a single outer body: each identical chamber gives 11-notes and the accompanying Duet Ocarina Book makes this the easiest of all double ocarinas to learn to play in harmony, producing a unique and exciting sound.

In January 1991 David and Christa returned to Chile & Bolivia, re-visiting museums and examining ocarinas in order to confirm that the English Ocarina is indeed unique. Whilst the ancient vessel flutes often produce a wonderful sound, the various finger patterns give a maximum of five notes. In June 2003, the ocarina experts presented their collection of over 1,000 historical Ocarinas at Kettering Manor House Museum, in conjunction with publishing ‘The Ocarina: a Pictorial History’ which is a comprehensive guide to Ocarinas and vessel flutes from 1000BC to the present day.

After our marriage in 1989, I left language teaching to become business partner in Ocarina Workshop. Within 6 months we had published our first computer-generated music books and exhibited at national Education Shows.

My modern foreign language teaching experience underpins Ocarina Workshop’s music-making model and our preparation of new resources. My German lessons were filled with the sound of spoken German as children confidently handled inflexion and vocabulary, ready to converse with a ‘sympathetic native speaker’ as dictated by GCSE oral criteria. New words, questions, phrases, and even grammatical structures were elicited by visual stimuli – pictures, objects or actions – the use of English was rare, allowing for immersion in the target language.

Just as children are keen to learn languages, they are keen to play musical instruments. They want to make sounds, play tunes and discover the world of music. The different ways of covering the Ocarina’s four finger holes can be pictured in code, by-passing formal learning of music ‘theory’ and allowing even pre-readers to recognise each finger-pattern and play accurately tuned notes. Staff notation, the written ‘target language’, gives musical direction whilst the ocarina finger-charts act as a visual prompt to facilitate fluent playing from the start. The motivation gained through playing ‘real’ music in class and in front of audiences is key to children’s rapid musical progress with Ocarinas. And when English is already a second language for many pupils, this resource is most welcome in twenty first century classrooms.

The English National Curriculum Music Programme of Study for English Primary Schools starts with the words ‘Music is a universal language…’ And the curriculum requires active music-making with tuned musical instruments for all children from the age of five upwards: In equipping pupils with English 4-hole Ocarinas and an immediate octave of notes, we are giving children a voice and something to say, enabling teachers to keep music as the target language in whole-class music lessons.

I still love class teaching and training teachers; this, and preparing ocarina-resources is a wonderful multi-faceted job that has grown with us over the last 30 years, along with extensive music-making and language-learning with our own children!